Episode Three - This Topic Will Hit a Nerve

The topic for episode three is set.

We're expecting some sparks in this one, but before you get all out of sorts, let us explain. Step one in our explanation is a simple definition of the word “ego”.

So, you see, ego is necessarily bad. A person's sense of self-esteem and feelings of self-importance are good things! We'd be dead wrong to beat up on that without further explanation. Where we're going with this episode is when your/my ego gets out of whack, either inflated or deflated.

When to "Fuck Your Ego"

There are two times when it makes sense to say “fuck your ego”:

2.       When your ego is under-inflated. Fuck your ego if you beat yourself up or tell yourself you’re not good enough!

We all know someone, and maybe it’s you/us, who’s ego is out of balance. This is simple human behavior that isn’t industry specific, but we’re going to apply this to our industry, nonetheless.

All of us have run into the asshole who makes you feel two feet tall. Ever asked one of these people for help? Often, their self-worth is shallow, measured by the number of Twitter followers versus the number of people they’ve helped. These people are toxic and we’re going to talk about it/them.

Low self-esteem is a killer, literally sometimes. We’ll go down this road a little, but this topic is a future episode unto itself.

What?! Well sort of. Even we have boundaries! We’ll do our best to NOT call out the bad examples by name in this episode. Doing so puts us in the same boat (or at least the same lake) as the people we’re complaining about. We’re not bullies, so we’ll try our best to steer clear of outing anyone. On the flip side, we will point out people in our industry who are GREAT examples of honesty and humility.

We’ll start with “Ashley” or @Infosec_Talyor as a good example, her banner pic sort of says it all!

See you at the shit show!

Repeat After Me:   I am NOT a neanderthal (Even if I look like one)   I do NOT walk around with a permanent hard on (IF you do, then you’re ... 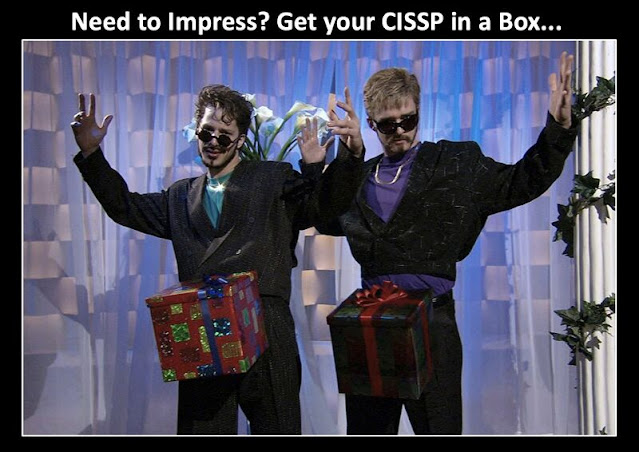