If you missed last week’s episode, the Security Shit Show crew tackled the difficult discussion about morals and ethics. There are two ways to treat you ears and/or eyes (not likely) to Episode #5, "Moral and Ethical Shit in a Shitty World":

It was an really good episode. A little bit of shit-slinging, but mostly just great discussion and opinion.

Rumor has it, the shit will only get better and better! 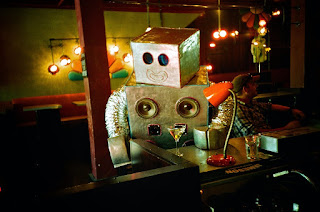 Alright, we’re ready for the next episode of the Security Shit Show! Shout out to a helpful (and maybe even loyal) viewer Robert Hodges for calling our attention to a neat article titled “Should 'Killer Robots' Be Banned?”.

Do killer robots sound like a good idea to you? Think about it...

Certainly, Chris, Evan, and Ryan will have a few things to say about the topic.

Catch us live on Thursday (6/11) night at 10pm CDT. If you miss the live show (other obligations, tired, etc.), keep a look out for the recording on the Security Shit Show YouTube Channel.

This is a topic fitting for any shit show!