Episode #35 - The root of all information security industry problems

Here's a question for you:

What is at the root of all information security industry problems? 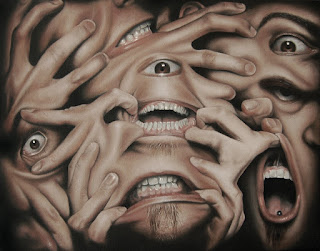 Alright, let's break this down then.

First, the question assumes there are "problems". Are there? We think so, but...

So, where are the problems then?

Simple, look for the people who suffer, the victims.

So, yeah. There are problems!

One group clearly takes advantage of the other. We'll call them "Profiteers" and "Victims". There's one more group. There's a group of us who are trying to protect Victims from the Profiteers. We stand in the void.

OK, so we've got problems. The masses become victims and feel the result(s) of the problems, the symptoms. Oh shit! The rabbit hole goes deeper.

We'll stop here, before things get too out of hand.

We need to save some shit for the Shit Show. Chris, Ryan, and I will take it from here. Maybe we'll get far enough down the rabbit hole, and deep enough into the shit to find some semblance of the "root of all information security industry problems".

Regardless of how far we make it, it should be entertaining!