NOTE: #ShitShow topic NOT my Grandma in Real Life before anyone gets worried! 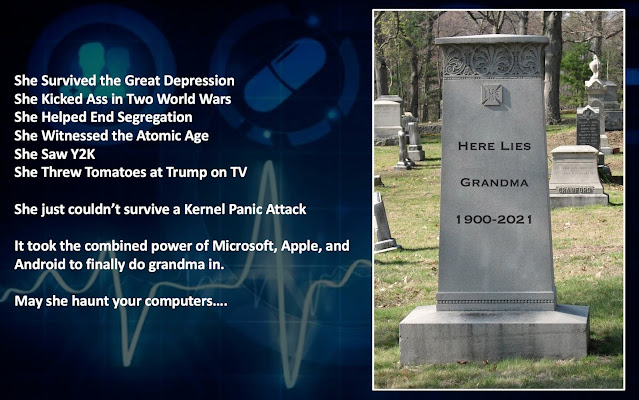 Annually, there are anywhere from 22,000 to 250,000 cases of death in the medical field that really should NOT have happened.

Firstly, I'm glad the medical field has as many problems as we do in counting how many people they've harmed. InfoSec has no REAL idea as to the implications of our actions beyond "Hey, Look! More data's out there..." At least in the medical field there's bodies to count.

The question then is how do you categorize death? IF they were sick before they came to the hospital does that count as malpractice, or "accelerated natural causes"? You get the idea. It's apparently rather subjective...

These two fields are coming together n something akin to a collision course of a plant sized scale.

Technology in/on/around the body (smart pills, nanotechnology, biotechnology, telemedicine, etc.) are all making serious inroads into "us" the human. Analog humans are becoming part OF the digital realm.

We need a LOT more forethought before medical malpractice add another tick box called "CAUSE OF DEATH... Kernel Panic".

So, join Ryan Cloutier, Evan Francen and the crew tonight on the Shit Show to discuss...